Yesterday was a big day for the members of the Portland Women's Forum.  It was our Spring Bus Tour and also the re-dedication of the re-purposed drinking fountain-to-monument that was installed in 1970.  It was replaced several years ago with an ADA (American's with Disabilities Act) approved fountain.  The beautiful old rock fountain laid on it's side in a State Parks shop yard ever since... and it held the beautiful bronze plaque that celebrated Gertrude Glutsch Jensen who was the first woman to make efforts to protect the Columbia River Gorge.  There were speeches and presentations and unveilings.. :-) 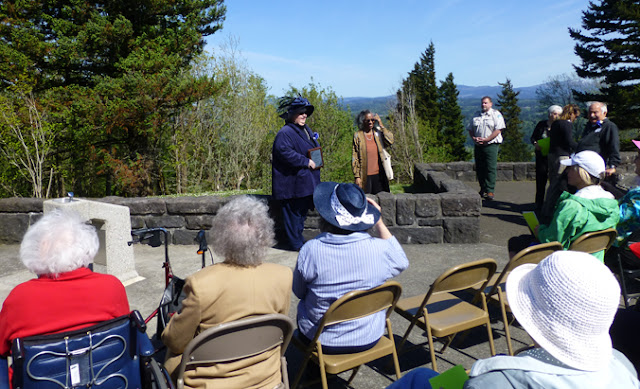 After the ceremony we had our annual group photo. With so many cameras taking photos, it was hard to get everyone looking at the right photographer and have their eyes open at the same time. Gabriel Weiss, the nice young man who did the stonework is on the far left.  LOL!  Funny story.. the wind was blowing and gusting to 30 mph and my new hat was blowing off my head, which was not good as I had a hatpin through it under my hair clip and that hurt!  So, this one guy pulled out of his pocket some black elastic and he tied a loop around the hat then tied another loop from it under my chin, which held it down for the ceremony.  :-) 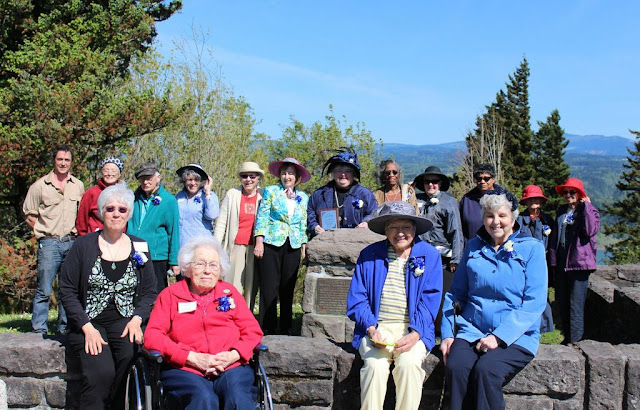 The president surprised me with this plaque for my efforts on getting the monument back "home" in the park. 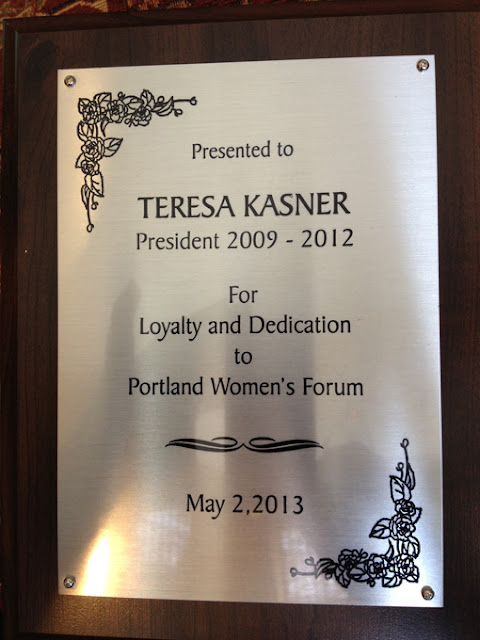 Me and the monument.  And a tied down hat. 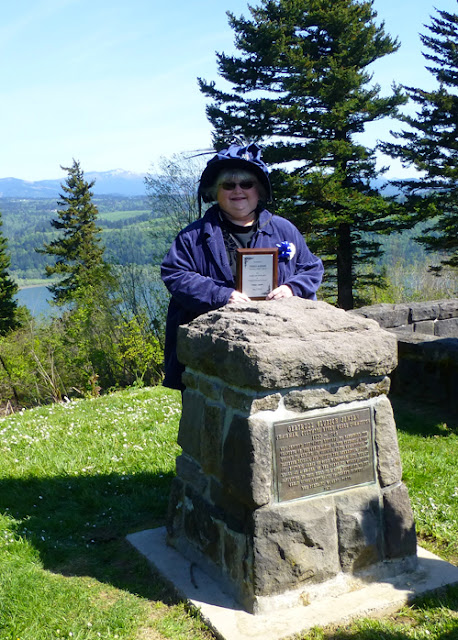 Below is Gertude Glutsch Jensen - an amazing woman.  The inscription on the plaque is:
Gertrude Glutsch Jensen -- Chairman, Columbia River Gorge Commission -- 1953 - 1969
Mrs. Jensen’s Dedicated Efforts to Safeguard the Grandeur of the Great Gorge of the Columbia River,  Helped to Create an Official State Commission to Preserve, Develop and Protect the Recreation, Scenic and Historic Areas of God’s Handiwork.  Her 20 years as a Leader of Portland Women’s Forum Activities in this Field is Living Testimony of Her Great Contribution and is hereby honored.
The Portland Women’s Forum - 1970 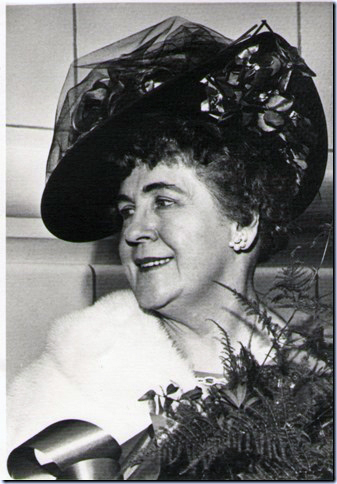 The view of the gorge and the monument.. this is what we protect. 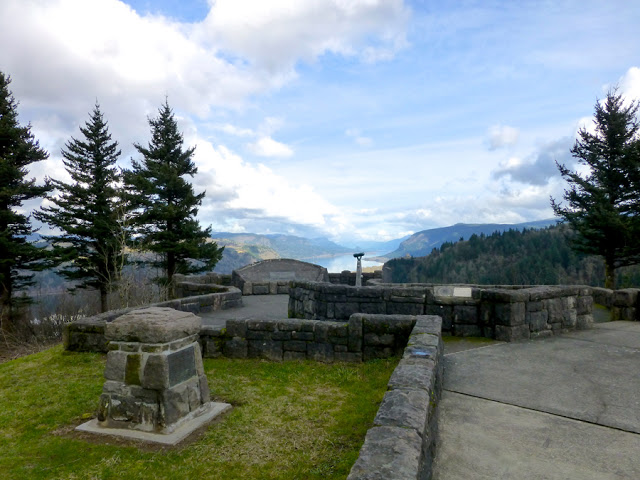 After the ceremony we headed to Crestview Manor for lunch and a tour of the building and grounds.  This is the manor from the back that looks over the gorge. 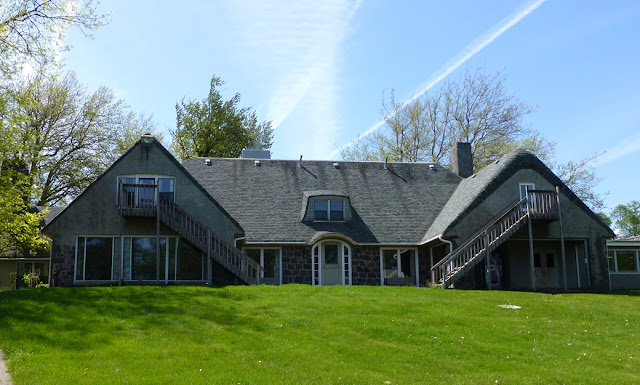 This is the view from the dining room down the river towards Portland, Oregon. 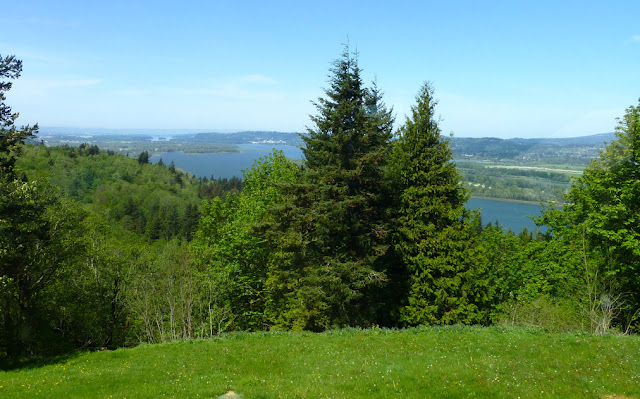 Once again the lunch was delicious.  Turkey croissant sandwiches with cream cheese and orange marmalade to spread on them, veggies and dip, chips, homemade broccoli cheese soup, and beverages. 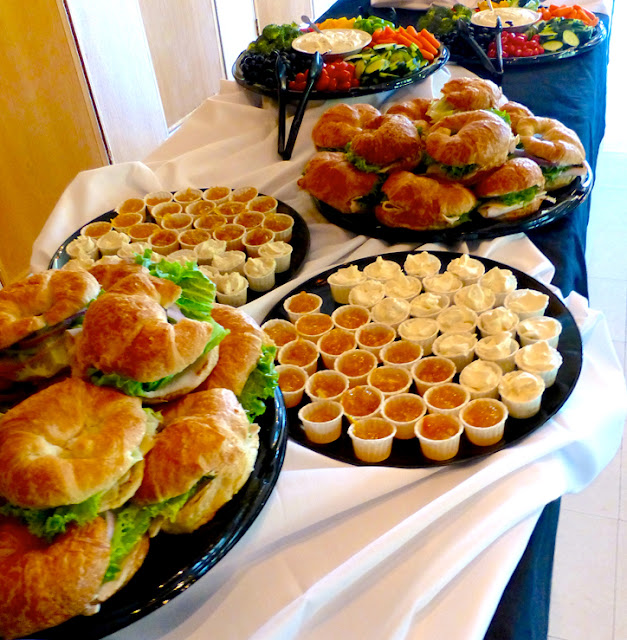 The ladies of PWF turned over the management of the park to the Oregon Parks and Recreation Department many years ago and we have a fantastic relationship with these guys who work out of Rooster Rock State Park.  They brought the fountain back up for the rock mason, Gabriel Weiss, to install and they take great care of "our" park. Kevin Price on the left is the District Manager of 71 parks!  His right hand man is Mark Stevensen (center), and his "left hand man" is Glen Littrell. 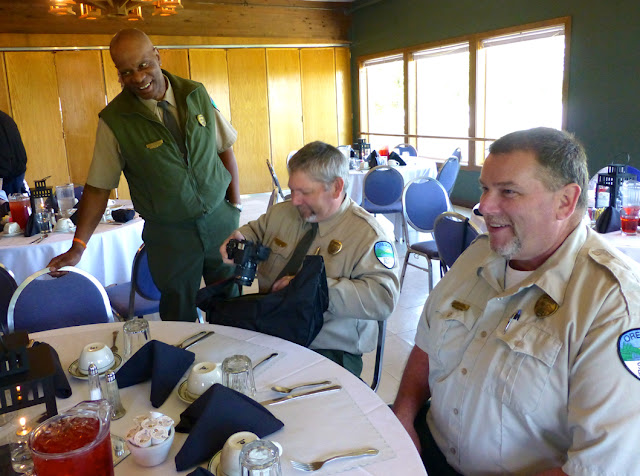 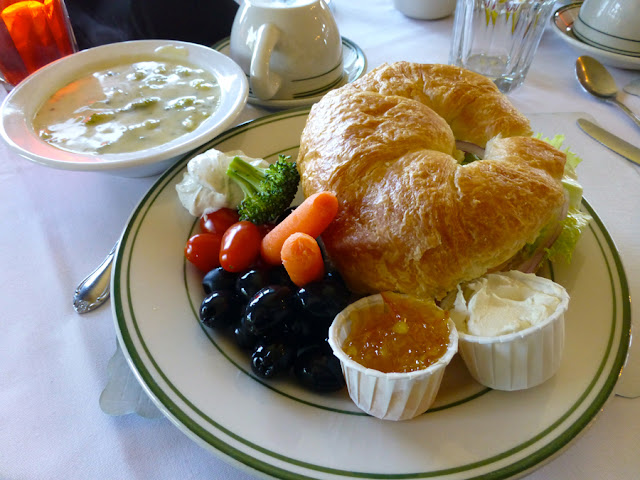 And the State Parks guys even brought two cakes for dessert, a chocolate one and this colorful one! 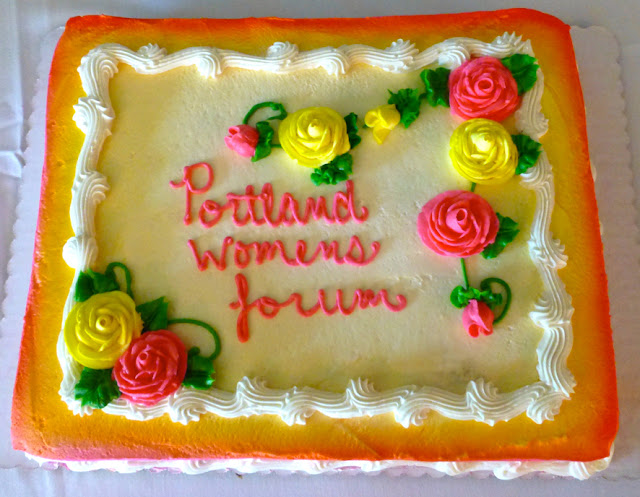 It was a great day.  Tomorrow we're off on a day long bus tour of the "Fruit Loop" in Hood River for the Friends of Multnomah Falls.  I'll take my camera.  Have a great weekend!!  ((hugs)), Teresa :-)