This is the "Before" photo of the Thanksgiving table.  The turkey is in the oven and the house is filled with the delicious aroma of sage and the 28 pound bird.  Our chef is Dayle.  He took on the turkey roasting when I was busy with three little children and he has kept on with it still.  Thankfully.  :-)  He first makes the dressing from scratch, chopping oodles of celery, onion and parsley and sautees it in copious amounts of butter.  Then pours the veg over the bread cubes, adds sage, salt and pepper and then tosses in some chicken broth to moisten it.  He stuffs some in the bird and the rest goes into a baking pan. 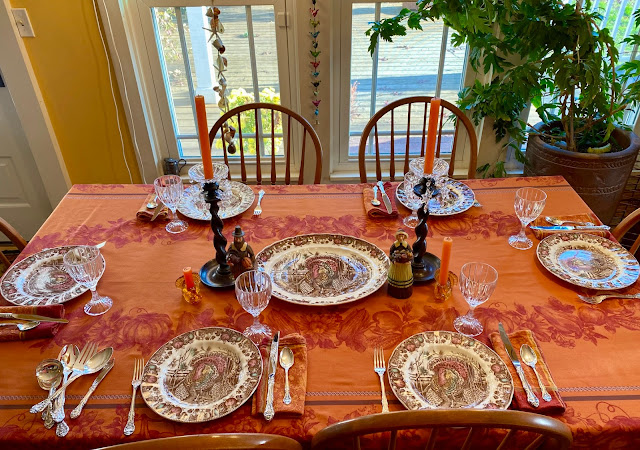 I spread the special tablecloth on grandma and grandpa's old oak farm table.  The turkey platter will soon be heaped with slices of deliciousness. 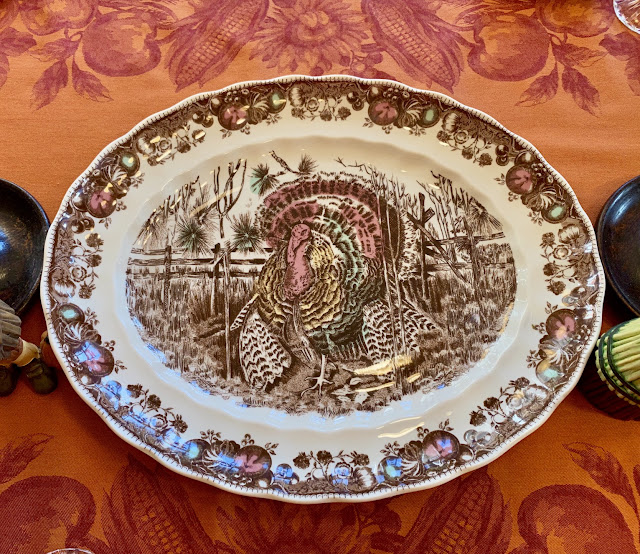 The silver is lovingly placed on folded napkins and crystal goblets ready for sparkling apple-cranberry cider. 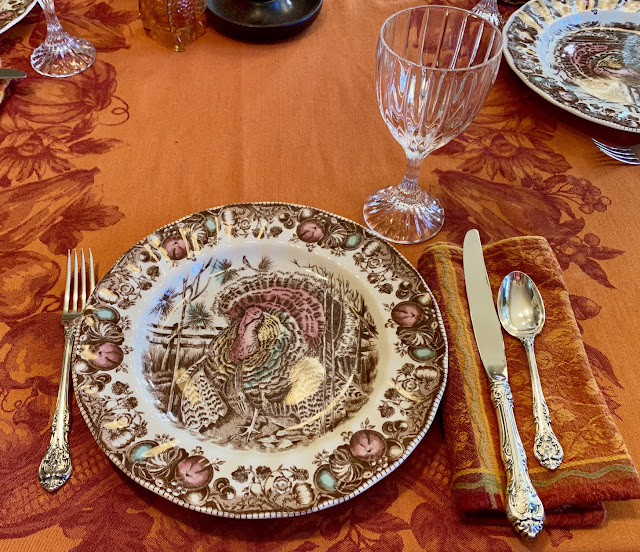 The kitchen goes into a fever pitch with Kristi coming over early to help out.  She peels and cubes the yams and russet potatoes and sets them to boil.  She and Dayle mix up the green bean bake and I perform the magic of topping the cooked yams with butter, brown sugar, a dusting of cinnamon and covered with mini-marshmallows. Then this beauty is lugged out of the oven!  I am the potato masher and use my newish red Kitchenaid mixer which held the whole 8 lbs. at once.  The last thing is making the gravy which required the attention of three of us. Dayle poured the drippings into a separator pitcher and removed most of the fats and put it back into the roasting pan.  We then added a quart of chicken stock, diced up giblets and a slurry of water and flour.  Kristi stirred and we added salt, pepper and a magic ingredient, called "Kitchen Bouquet" which my sister Denise recommended.  Wow, that added a lot of flavor and color to the sauce.

Kitchen Bouquet is a browning and seasoning sauce primarily composed of caramel with vegetable flavorings. It has been used as a flavoring addition for gravies and other foods since approximately 1873. Its ingredients include caramel, vegetable base (water, carrots, onions, celery, parsnips, turnips, salt, parsley, spices). 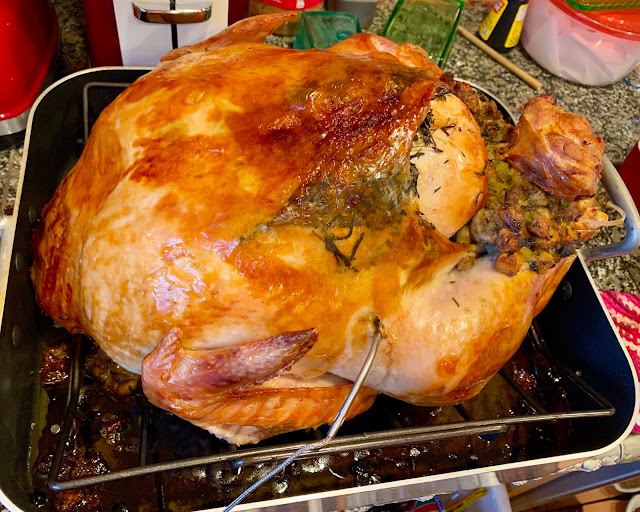 And before we dig in I snap the photo for historical purposes.  I love looking back over the years and seeing who is here and how the children are growing.  I have to laugh as we still produce the same amount of food as we did when the entire family of 14 was around the table.  But the leftovers are wonderful and we have turkey dinner for days.  LOL! 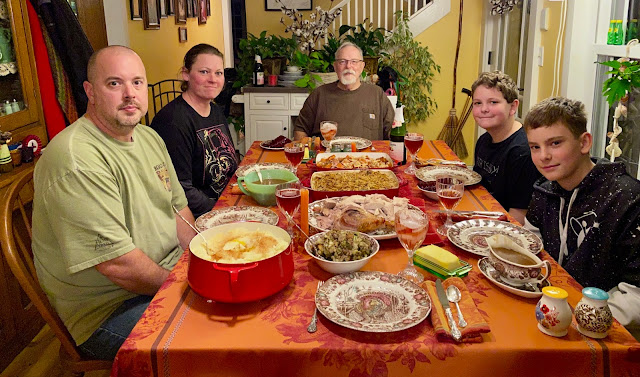 And.. here we are, the result of days of planning, days of shopping, hours of cooking.. one rather full plate of divine yummies.  You can't even see the turkey as it's under the potatoes and gravy.  :-) 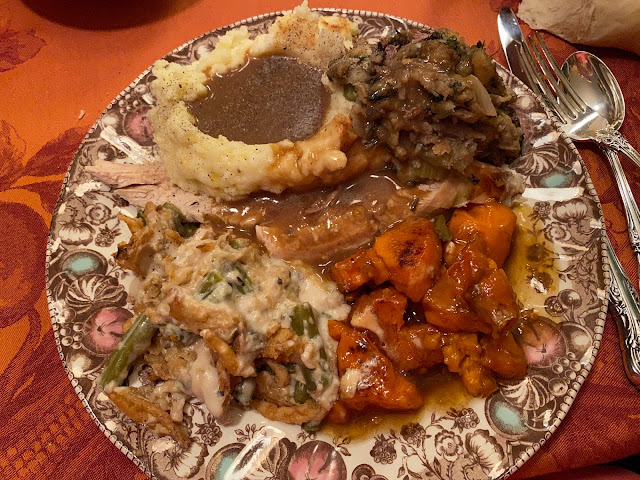 Yes, we were all stuffed like a turkey and after we finished the meal we all went around the table to say what we were thankful for from the last year.  Caleb said "math", Hayden said "for not being in 5th grade anymore", I said "for Dayle still being with us", Kristi said "family", Travis said for "family and a good job", Dayle said "family and still being around to enjoy us all".

Mocha was thankful for some turkey tidbits while Dayle was carving the bird.  :-) 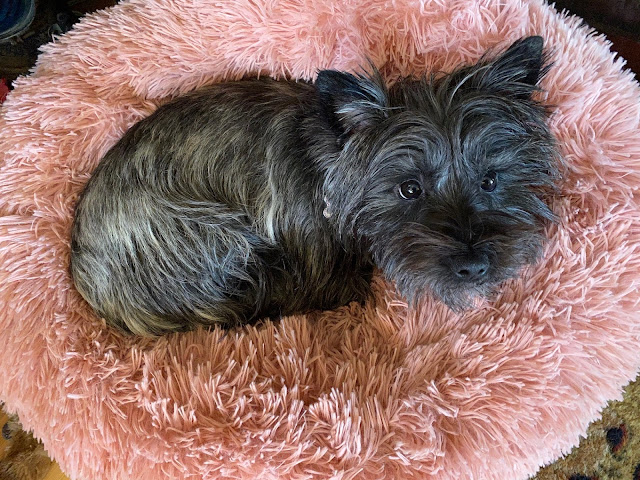 Today we're relaxing and enjoying the glow of the memories of having our loved ones here.  Our son Shawn and grandson Michael both worked the holiday.  They were missed.  Our daughter Amy in Ohio hosted her in-laws and cooked her very first Thanksgiving turkey at the age of 47.  She said it all turned out good and they had a nice time, all 13 of them.

Tell me... what are YOU thankful for from the last year?