Yesterday an historic election was held in Georgia where 2 Democrats won and balanced the power in our Senate from a Republican majority to 50-50.  This will allow our new President, Joe Biden and Vice President Kamala Harris to actually get some work done and not have everything they try to do be blocked by the Senate Majority Leader.  That is the happy part.

The photo is the only one today, my Shamrock plant is blooming which is a hopeful thing. 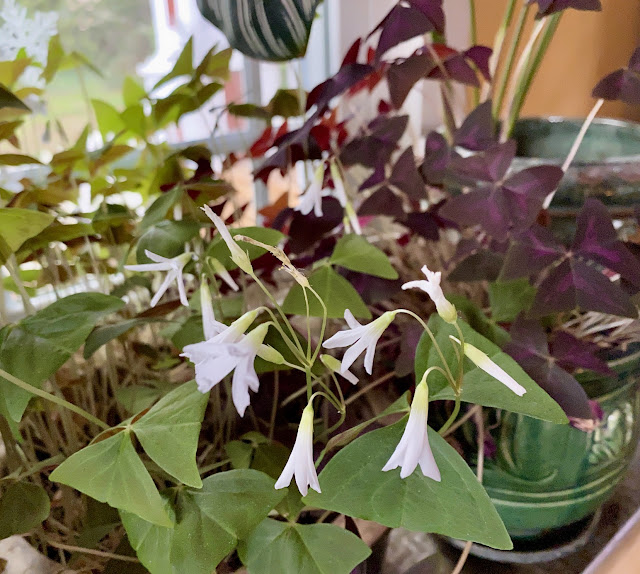 The sad part is while the Senate was approving the Electoral votes to finalize the presidential election a violent, raging mob of anarchists and domestic terrorists stormed the Capitol building. They broke through windows and security and thronged through the Capitol Rotunda and onto the Senate floor. The Vice President and legislators were rushed to safety by the Secret Service and all Senators and House Representatives are donned gas masks and were told to shelter in place in their offices and taken to safety.  Shots were fired in the Capitol building.

This started weeks ago when Trump tweeted to his followers to come to Washington DC for one of his rallies on January 6th, the day that our government leaders would certify the electoral votes that makes Joe Biden our 46th President.  He invited them to a rally by the White House and told them "it would be wild!".

For 1 1/2 hours he spewed lies and whipped them into an angry mob an urged them to walk with him to Capitol.. he then slunk away while they all marched and descended on the building, where they broke windows and kicked in doors and streamed into the building.

They ransacked the place, they trashed the Oregon Senator, Jeff Merkley and stole his laptop.  One a woman is dead, a Trump fanatic, she was crawling through a window inside the building and was shot by those protecting the Senators.  Her life is on his head.  (Update: 4 people are dead from the riot of trump supporters - 3 more died, 1 a heart attack and one tased himself and died.)

Also edited to add: trump supporters are claiming it was antifa who did all the damage there - yes, there were some but the fact is they supported the insurrection led by DJT and so they acted to support his goals of overturning our election.  I watched the news and 90% of the people I saw were trump supporters wearing his hats and waving his flags.  This is on HIM.

l am sickened by this.  Please keep our country in your thoughts.